A beech tree is dedicated to Frank Brewer, a currently retired employee of the University of Maryland that served as the Associate Vice President of Facilities Management1 and as Interim Vice President of Administrative Affairs.2 Brewer retired at the end of June 2011, stating, “This university has been very good to me. I've been here 41 years and part of me will always be here.” Brewer received both undergraduate and graduate degrees at UMD. At 66 years old during his retirement, he cited age as the reason for his tough decision of stepping down.1 Brewer will be remembered for his contributions to the UMD Administration, such as participating in a dialogue on workers rights at the Black Faculty & Staff Association.2 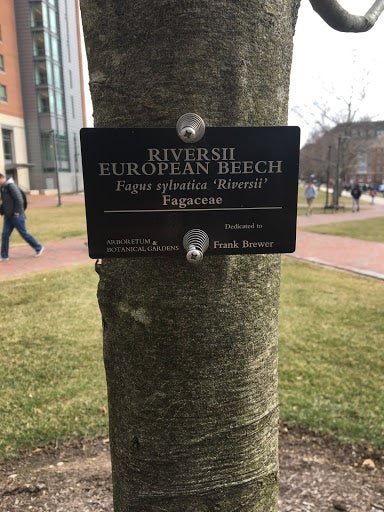 About the European Beech 'Riversii'

The tree dedicated to Frank Brewer is located on the east side of Van Munching Hall, near the main entrance. It is a River’s Purple European beech (Fagus sylvatica 'Riversii'), a large deciduous tree known for its smooth, gray bark, short trunk and low branches.3 Although the European beech usually has dark green leaves, the River’s Purple variety has large, glossy leaves that are purple in the spring, purple-green in the summer and copper in autumn. The European beech is distinguished from the similar American beech (Fagus grandifolia) through its shorter stature and darker bark. This tree is native to central and southern Europe and was brought to America by European colonists in the mid-1700s. Its specific epithet, sylvatica, is Latin for “growing in woods” or “forest-loving,” a perfect description of a large, shade-providing tree. The European beech usually grows to 50-60 feet tall with a dense, rounded-spreading crown of foliage and a trunk diameter of 2-3 feet. This specific tree is fairly young, so it is 25.0 feet tall with a trunk diameter of 5.6 inches.The European beech has yellow-green flowers that bloom in April-May, with male flowers in globular clusters and female flowers in short spikes. The female flowers form triangular beechnuts that ripen in the fall and are technically edible, although eating them is not encouraged on campus.4 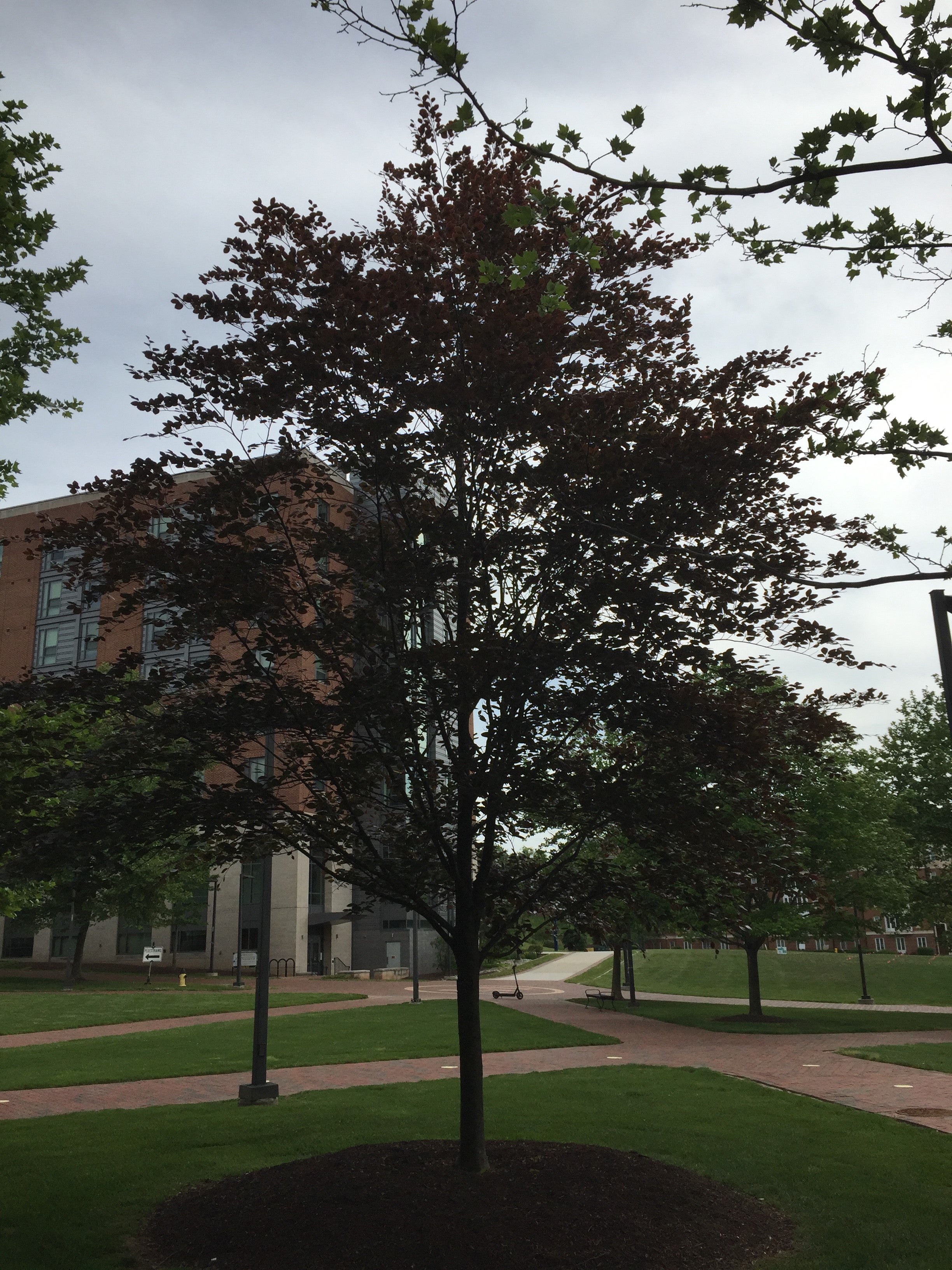 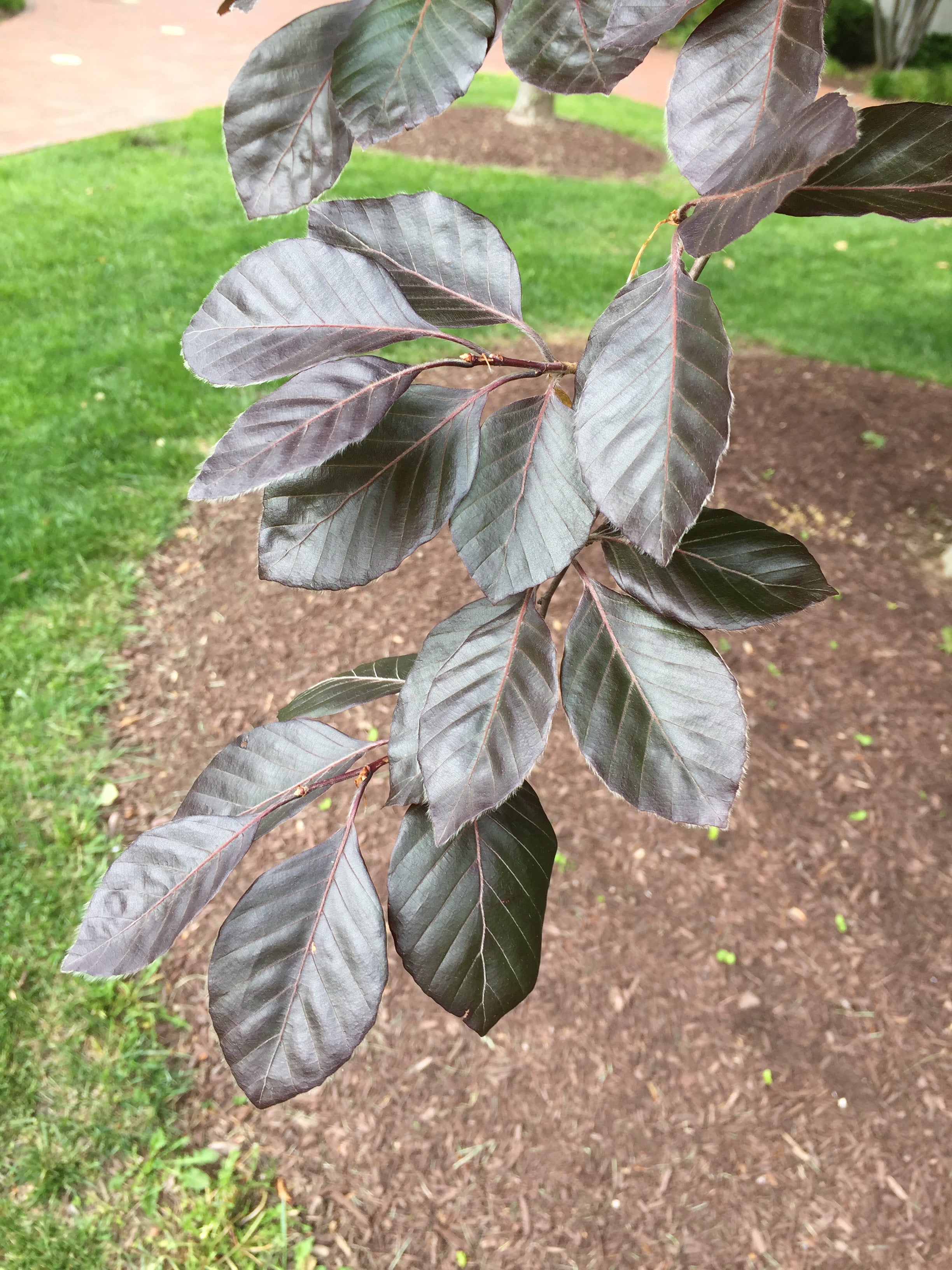