Family Reunion, part of the Prince George's County "Birds-I-View" promotion, sponsored by the Prince George's Arts Council, sit outside the Center for Young Children on north campus. The blue bird is the county's official bird and many of these were created starting in 2003 and place around the county1. Family Reunion was created by Temple Hills, MD artist Caroline Afande and unfortunately, went missing for a period of time, much to the disappointment of the campus community, especially the children who attend school at the Center for Young Children2. The statue was eventually returned and in 2016, received a facelift from two UMD students who noticed the fading paint, Yilin Zou and Elaine Qiu, both graduates of the Plant Science and Landscape Architecture Department, who were actively engaged in the CYC landscape projects. Children from the CYC kindergarten helped submit ideas for the new bird and were delighted with the results. One kindergartener said, "It's better than beautiful!"3. 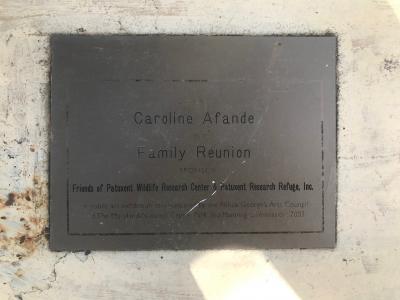