A Colorado blue spruce is dedicated to Dr. David G. Kyle, who was an associate professor of education and the Assistant Director for the Institute of Child Study at the University of Maryland College of Education from 1976 until his death in 1979. He had been with the College of Education since 1962 and received UMD’s Excellence in Teaching Award just shortly after in 1965. Dr. Kyle’s specialization was in working with teachers to understand student behavior as well as human development, in which he helped establish programs for masters degrees at two UMD extension schools. Dr. Kyle was born in Wheatland, Wyoming, but he grew up in Brighton, Colorado. He received his bachelor’s and master’s degrees at the University of Denver and his doctorate at UMD. Dr. Kyle served with the Navy Hospital Corps in World War II and then worked in the Kings County, California public school system as a psychologist, guidance consultant and child study coordinator. Dr. Kyle, a resident of New Carrollton, passed away from a cerebral hemorrhage on June 20, 1979, at Doctor’s Hospital in Prince George’s County.1

About the Colorado Blue Spruce

The Colorado blue spruce (Picea pungens var. glauca) planted in memory of Dr. David G. Kyle is adjacent to the west side of the Benjamin Building and can be easily spotted from Union Drive. It is currently 14.0 inches in diameter and 34.0 feet tall, but it can grow to be up to 60 feet tall in cultivation and up to 100 feet tall in the wild.2 The blue spruce is a needled evergreen and member of the pine family. It has a tall, narrow, conical shape with stiff, outward growing branches and dark gray bark that furrows (forms deep lines) when mature. The blue spruce is non-flowering, but it does have characteristic stiff, bristly blue-green to silver-blue needles that give it a blue tint. The tree has a native range in the Rocky Mountains at 6,000 to 11,000 feet in elevation, since it prefers cool climates with moist soils, so it’s a real privilege to have one at nearly sea-level UMD.3 Varieties of the Colorado blue spruce with blue-white and silver-blue foliage are often cultivated,3 as the tree is a popular Christmas tree.2 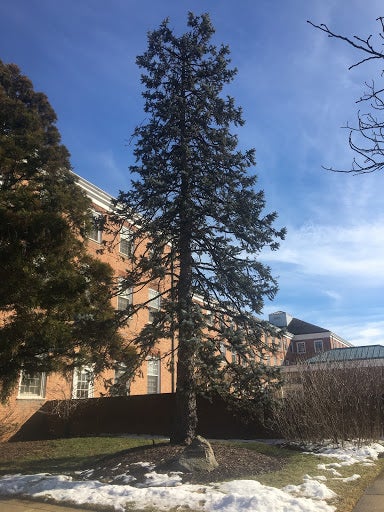