This tree is dedicated to Michael H. Long, internationally renowned Professor of Second Language Acquisition and founding Director of the School of Languages, Literatures, and Cultures. A pioneer in the field, Long conducted seminal research and taught and inspired students and colleagues around the world for over four decades.  He authored and co-authored 20 books, 70+ book chapters, and 50+ journal articles, many of them highly influential. Long received a Bachelor of Laws with honors (University of Birmingham), a Post-graduate certificate in Education (University of London), a Masters in Applied Linguistics with distinction (University of Essex), and a Doctor of Philosophy in Applied Linguistics (UCLA). He was Professor at the Universities of Pennsylvania (1980-2), Hawaii (1983-2003), and Maryland (2003-2021) and Visiting Professor, both nationally (Northwest, Columbia, Georgetown, Michigan State) and internationally (Australia, Canada, China, Denmark, Japan, Spain, and Yugoslavia).  Long received many honors throughout his career, most recently a Doctorate Honoris Causa from Stockholm University (2009) and the Lifetime Achievement Award from the International Association for Task-Based Language Teaching (2017). As his students and colleagues often say, Michael H. Long was a force. He passed away much too soon on February 21, 2021.

About the Kentucky yellowwood

The tree dedicated to Mike H. Long is a USDA Organic Certified, American yellowwood with the scientific name of Cladrastis kentukea. This tree is located south of Jimenez Hall on the UMD campus. The American yellowwood is native to North America, specifically the southeastern United States. This tree has many significant features, including its leaves, flowers, seed pods, and bark.1 The leaves are pinnately compound, beginning with a bright green color that turns yellow in the fall.2 In late spring, the tree produces fragrant, drooping panicles of white flowers. Profuse blooms may occur every two to three years. These flowers give way to flattened, thin seed pods that mature in September to October.1 Lastly, the bark of the American yellowwood is smooth and gray.2 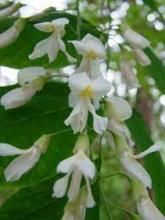 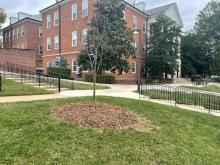