This tree was dedicated to Chaplain Elizabeth Platz, the first Lutheran woman to be ordained in North America. She was ordained in November of 1970, the same year women became approved to be ordained,1 by the Lutheran Church of America at the University of Maryland’s Memorial Chapel. Platz served her entire ministry as a University of Maryland Lutheran pastor. For 47 years, she influenced the lives of Lutheran students to remain active in the church and in service to others. Before becoming ordained, Platz earned a Bachelor of Divinity at the Lutheran Theological Seminary at Gettysburg, Pennsylvania. She also served as assistant Lutheran chaplain at UMD before becoming ordained.2 Chaplain Elizabeth Platz has been seen as a symbol for the advancement of women in the church throughout her career.1

About the Forest Pansy Redbud

This tree was contributed by the Lutheran Student Association’s graduating seniors of 2004 in honor of Chaplain Elizabeth Platz. This tree is a Ceris canadensis ‘Forest Pansy’, or Forest Pansy Redbud, and is located in the Garden of Reflection and Remembrance. The Redbud is native to North America and Canada, in regions of Connecticut to New York, to the Great Lakes region and southern Ontario, and to Western Texas and Florida. Before the foliage emerges, the tree flowers in early spring, producing an abundance of small, red-purple flowers that make the tree particularly stunning. The flowers eventually lead to bean-like dry seed pods that mature and brown in the summer. The foliage of the ‘Forest Pansy’ cultivar are heart-shaped, purple leaves that turn variable colors in the fall, including reddish-purple and orange.3 The flowers of this tree are attractive to nectar-seeking insects and the seeds and nesting sites attract a variety of birds.4 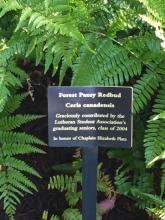 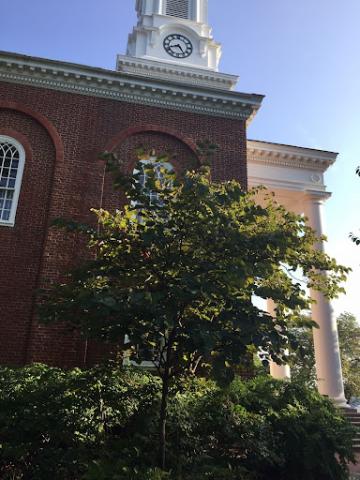