Carolina Rojas-Bahr was the former Assistant Director for Student Advancement in the Office of Multi-ethnic Student Education at UMD, where she worked for eight years. Rojas-Bahr was born in Asuncion, Paraguay, where she graduated from the National University of Asuncion. After moving to the U.S., she received her master’s degree in educational research policy at the University of New Mexico, and was on her way to completing a doctorate in oral history at UMD. Throughout her career, Rojas-Bahr taught French and Spanish at St. Andrew’s Episcopal School in Potomac, did research on international migration at the Carnegie Endowment for International Peace in Washington, and published academic papers in English, French and Spanish. While at the Office of Multi-ethnic Student Education, she coordinated the academic enhancement program and was a founder of both the Latin Group, a leadership organization for faculty and staff, and Cross-Cultural Encounters, a set of workshops for students of varied cultural backgrounds. Due to her critical role at the Office, she received the Staff Minority Achievement Award in 2002, the John Hernandez Award from the Hispanic Heritage Coalition in 2001, and the title of faculty member in 2000. Rojas-Bahr passed away on June 20, 2007, from a fall at her home in Kensington.1

About the Golden Rain Tree

The tree dedicated to Carolina Rojas-Bahr is located on Hornbake Plaza towards the Edward St. John Center. It is a golden rain tree (Koelreuteria paniculata), is a small, rounded yet irregularly-shaped deciduous tree. It typically grows 30-40 feet tall and wide, but this specific tree is 20.0 feet tall, 3.1 feet wide in the radius of the foliage, and has a trunk diameter of 6.3 inches. The golden rain tree has pinnate (arranged as opposite pairs on the branch), feathery leaves, each with 7-17 irregularly lobed leaflets. The leaves begin as pinkish bronze to purple in the spring and turn bright green in summer and yellow in autumn. The tree has characteristic bright yellow flowers that appear in early summer in long panicles (branched groups of flowers), which fall and give the tree its name of “golden rain.” After the flowers follow brown, air-filled, papery seed capsules, similar to Chinese lanterns.2 The tree has light gray bark that is shallowly ridged. The golden rain tree is native to China, Japan and Korea, and it is often found in dry, rocky sites.3 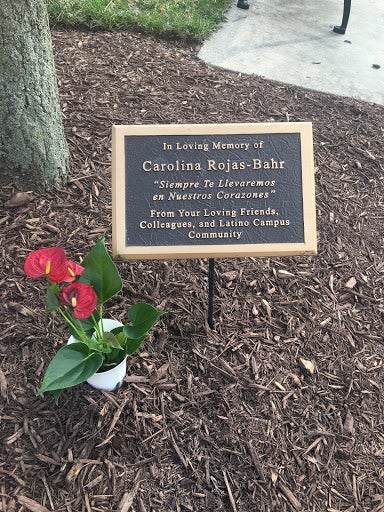 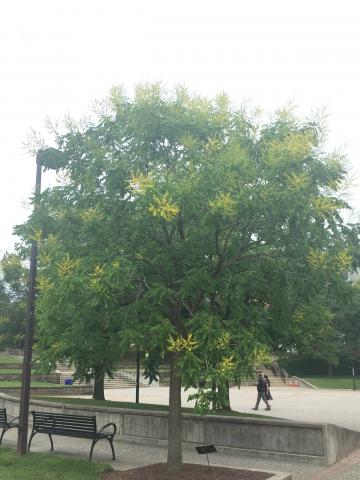