About Dr. John B. Slaughter

About the White Oak

The tree dedicated to John B. Slaughter is located on the southwestern side of the Armory. It is a white oak (Quercus alba), which is the state tree of Maryland. White oaks are named for their light gray bark and are large, long-lived, slowgroing,3 deciduous trees with large-spreading crowns. They are native to eastern North America.4 They grow to be 60-150 feet tall with trunk diameters of 3-4 feet,3 but Dr. Slaughter’s tree is currently only 24.0 feet tall with a trunk diameter of 3.2 inches and a crown radius of 9.1 feet. The white oak grows glossy, bright green leaves with about 5-7 round lobes per leaf and insignificant yellowish-green flowers. Leaves grow in pinkish in the spring and turn colors ranging from brown to a dark red in autumn.4 Only after about 50 years of growth, the white oak begins to produce acorns, which sprout soon after falling.3 The acorns are oval-shaped and have shallow, warty caps,4 and the white oak can produce around 10,000 at a time. Native Americans that lived in the area would grind the sweet-tasting acorns to produce a flour.3 The wood of the white oak is commonly used in the timber industry.4 The tree dedicated to Dr. Slaughter is of the Wye variety, which refers to what was believed to be the largest white oak in the nation planted near the village of Wye Mills in Talbot County in the 1500s. The original Wye tree unfortunately collapsed due to a thunderstorm in 2002.5 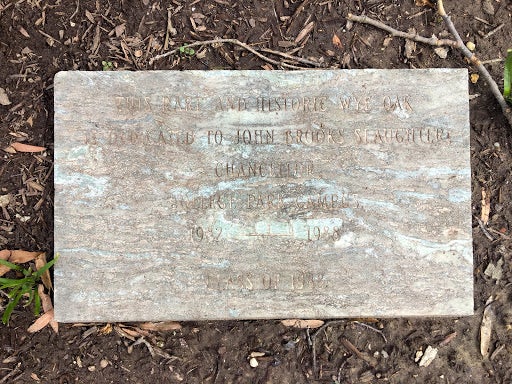 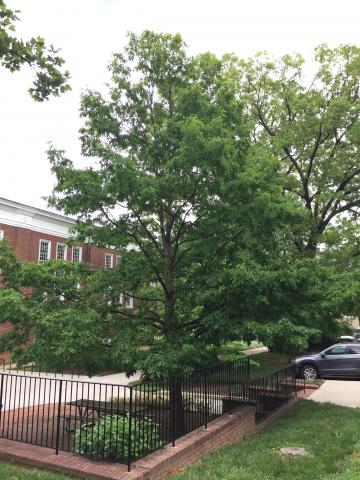